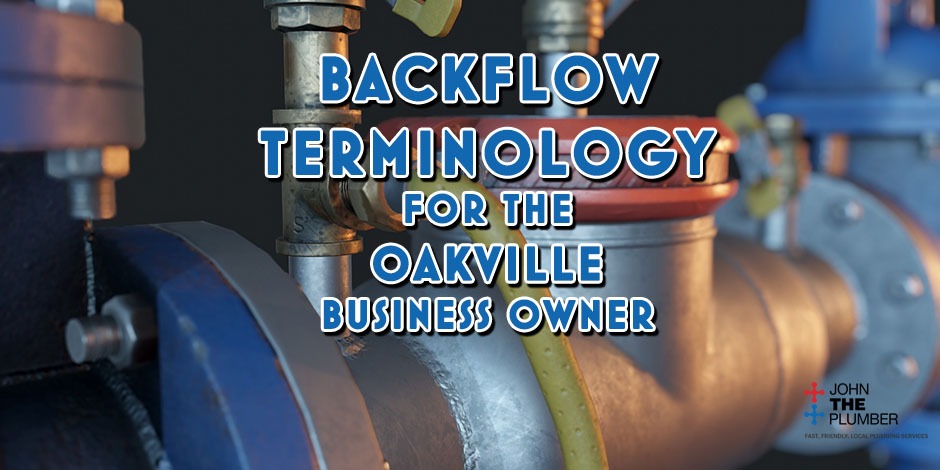 If plumbing is not something that you are familiar with, you may be confused if you have received a notice in the mail from the City of Oakville requiring you to install a backflow preventer for their Backflow Prevention Program. Here at John the Plumber Oakville we want to help you understand what it being asked of you and why, and thought we would write this blog about backflow terminology for you to help explain what backflow prevention is all about. The term serves as a blanket for all things having to do with backflow; it’s about protecting your water system from the possibility of having dirty water backflow into it.

Your internal plumbing is designed so clean water (also known as potable water) runs into your building, and waste water (sewage or storm) runs out of your building. The term backflow refers to when this system is not operating properly, and water is running in the opposite direction of where it should be going in your pipes. Normally, your water is generally under pressure and will naturally flow in the direction of high pressure to low pressure. However, certain negative conditions such as heavy rainfall for example can overload this pressure system, and force water to run in the wrong direction, causing backflow in your Oakville business.

“Back siphonage” is a term you may also hear when it comes to backflow prevention. It is another way of saying that the normal flow we described above has gone into reverse due to negative pressure in the water supply. This should be noted as a health risk and tended to as soon as possible; backflow or back siphonage poses a high risk of contaminated water entering into your drinking water system.

Another key term concerning backflow prevention is a “backwater valve”; these are check valves designed to literally allow water to only flow in one direction. The valve is normally set in an open position; when backflow occurs the valve will close, preventing contaminated water to backflow into the potable water. Once the unbalanced pressure is under control, the check valve will open once again so both water streams can run in their respective directions.

“Cross connection” is another useful term to be aware of. This is where a connection between a public water system and non-potable (contaminated) water exists. Cross connections are common and require protective measures to avoid waste water from contaminating your drinking supply. This type of thing can be found where multiple water use connections can be found in one building; an example of this are drinking fountains and faucets/drains used to clean medical equipment. It all must be separated.

If you are unsure which way your water is running and want to be certain you are in line with your city’s backflow prevention program, give us a call at John The Plumber Oakville and we’ll send one of our licensed professionals to ensure you are safe!

To discover more on the full range of services offered by our Oakville-based John the Plumber, please call our offices today at 289-644-3856 or visit our business website at johntheplumber.ca/oakville